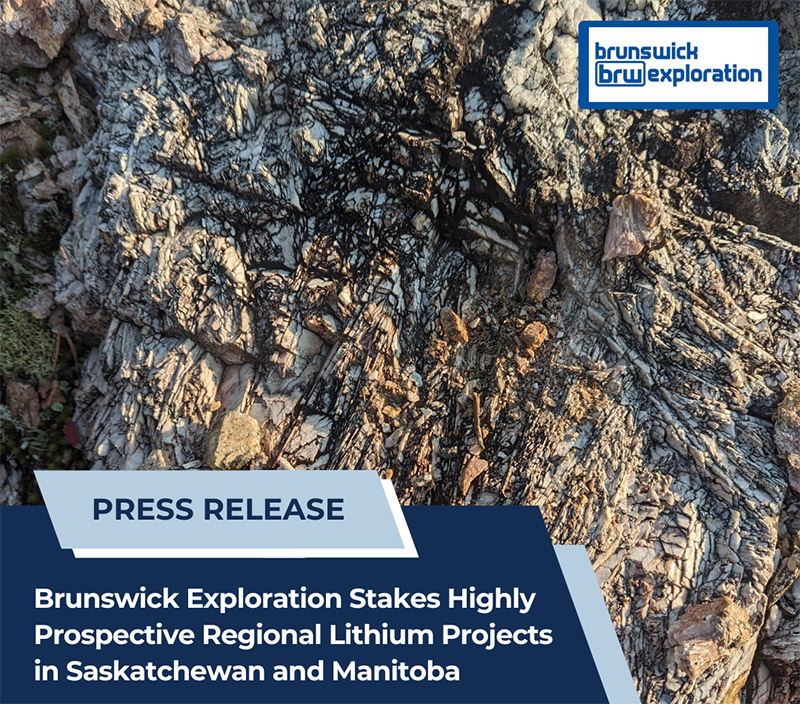 Montreal, January 17th, 2023 – Brunswick Exploration Inc. (“BRW” or the “Company”) is pleased to announce that it has map-staked 135 outcropping, untested S-type pegmatites, measuring between 500 and 14,500 metres in strike length, in Saskatchewan and Manitoba over a surface area of 81,288 hectares. The newly claimed pegmatites were identified following compilation work by BRW and all are within approximately 50 kilometers from existing road or power infrastructure.

Mr. Killian Charles, President and CEO of BRW, commented: “We are very pleased to expand into Western Canada with such a robust and prospective portfolio of targets. Saskatchewan and Manitoba are reliable mining jurisdictions and boast some of the best outcrop exposure that we have seen in the Canadian Shield. Importantly, most of our package is within the Trans-Hudson belt which hosts lithium deposits in the Snow Lake region of Manitoba and the Black Hills of South Dakota. Currently, Manitoba hosts the only producing Lithium-Cesium-Tantalum (“LCT”) mine in Canada and it is surprising that more exploration work hasn’t been done in either province. These impressive grass-roots packages are a tremendous addition to our Canadian portfolio with helicopter-supported prospecting expected to start in Q2 2023.”

The Trans-Hudson Project comprises 36 claims with a total surface area of 79,892 hectares, located roughly around and in between the communities of Creighton, La Ronge, and Southend in central Saskatchewan. The properties contain 124 mapped and interpreted pegmatites that are between 0.5 and 14.5 kilometers in strike length. Pegmatites were staked based on preferred geologic environments, historical geochemistry and historical mapping. Importantly, they have seen little to no exploration for lithium. The Trans-Hudson orogeny is a series of Paleoproterozoic volcanic and metasedimentary belts that join the Superior, Hearne-Rae and Wyoming cratons of the Archean. This package hosts numerous mafic volcanics, felsic volcanics, granitoids, gneisses, metasediments, quartzites, marbles and pegmatites. Many pegmatites are described as white and containing beryl, tourmaline, garnet and/or muscovite, which indicates they are S-type and have potential to host LCT mineralization.

This Project comprises 1 claim with a total surface area of 1,386 hectares, located roughly 75 kilometres west of Uranium city, near the border with Alberta. The property contains 2 mapped pegmatites that are roughly 1,500 metres in strike length. Claims were staked based on preferred geologic environments and historical mapping and have seen no prior lithium exploration.

The company has applied for 3 Mineral Exploration Licenses with a total surface area of 27,163 hectares, located roughly 20 kilometres north-west of Lynn Lake, near the border with Saskatchewan. Lynn Lake is a well-established mining hub in Northern Manitoba with all necessary infrastructure in place. The property contains 9 mapped pegmatites that are between 500 and 8,500 metres in strike length. Claims were staked based on preferred geologic environments and historical mapping that have seen little to no lithium exploration. This project is within the Paleoproterozoic Trans-Hudson belt that extends to BRW claims located in Saskatchewan.

The scientific and technical information contained in this press release has been reviewed and approved by Mr. Charles Kodors, Manager Atlantic Canada of Brunswick Exploration. He is a Profession Geologist registered in New Brunswick, Nova Scotia, Ontario and Saskatchewan.

Brunswick Exploration is a Montreal-based mineral exploration company listed on the TSX-V under symbol BRW. The Company is focused on grassroots exploration for lithium in Eastern Canada, a critical metal necessary to global decarbonization and energy transition. The company is rapidly advancing the most extensive grassroots lithium property portfolio in Canada with holdings in Quebec, Ontario, Saskatchewan, Manitoba and Atlantic Canada.

January 17, 2023
Newsletter
Sign up to receive all our news to your inbox:
Recent News
Go to Top